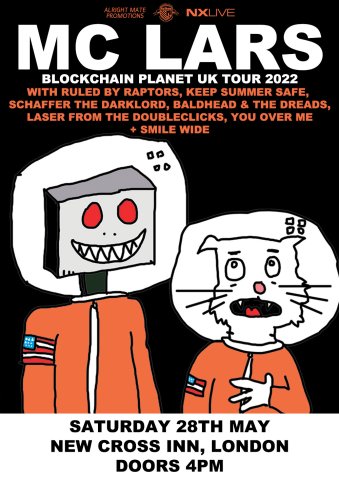 MC Lars
BLOCKCHAIN PLANET UK TOUR 2022
MC Lars is the creator of post punk laptop rap and lit hop, which he has extended and powered into a fusion of rap, punk, rock, ska, pop, and other genres. He is post-modern -- combining his music with powerful and present lyrics, and packing concert venues with raps about everything from the iGeneration to Guitar Hero to Edgar Allen Poe to Game of Thrones, the Simpsons and Cyberbullying. He speaks to and for people of all ages, lifestyles, and perspectives, and is a story-teller, covering love, life, loss, confusion, and hope. He does so with energy and wit, joined with a strong sense of humor and perspective.
https://mclars.com/

Schaffer The Darklord
Schaffer the Darklord (or STD) is a New York City-based rapper, drummer and comedian with material best-suited for nerdy and/or hedonistic audiences. With manic energy fueling a cartoonishly commanding stage presence, STD skewers such topics as substance abuse, sexual compulsion, urban anxiety and obsessive cat-enthusiasm. Imagine a Frankenstein-esque monster assembled from equal parts Bill Hicks, Adam Yauch, Joey Ramone and Prince, stitched together inside the shell of a maniacal heavy metal ex-patriot. STD has released nine albums and is a founding member of the touring nerdcore hip-hop collective known as the Four-Eyed Horsemen, along with MC Lars, Mega Ran and MC Frontalot. When he's not on the road, he produces the NYC burlesque/wrestling hybrid event called “TasselMania.” STD continues to write, record and perform with great frequency and has no intention of stopping until his rock and roll lifestyle destroys him.
http://schafferthedarklord.com/​

Baldhead & The Dreads
Ridiculous ska-punk for fans of drugs, dogs, and dancing.
http://baldheadandthedreads.bandcamp.com/

Laser (from The Doubleclicks)
Laser is a folk-pop singer-songwriter who “challenges the patriarchy, champions marginalized voices, and finds emotional resonance in everything from robots to breakfast foods.” They have toured the US, Australia, and Europe as front person of the Doubleclicks, and have racked up over 4 million Youtube views amongst their large and beautiful grassroots audience. Laser’s latest project, Billboard-charting musical concept album "Teaching a Robot to Love," is a sci-fi story about the trans experience.
http://www.thedoubleclicks.com/

You Over Me
Energetic, electric and eager to make their mark on the up and coming pop-punk scene, You Over Me are a free minded, multi gendered, lively bunch of self made musicians. Since forming in 2019, the 5-piece outfit have gained a reputable following with their catchy tunes and explosive on stage performance. You Over Me continue to bring new sounds and ideas to stages across London with their own dynamic blend of modern Alt-Rock and Pop Punk concepts.
http://youovermeband.bandcamp.com/