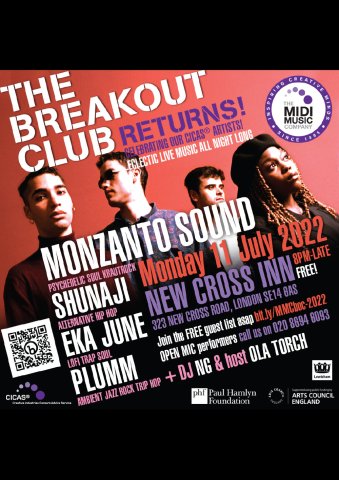 A night dedicated to celebrating the return of The Midi Music Company's CICAS® artists with an eclectic mix of live music and new talent.

Hosting the night is Ola Torch with DJ NG (Ministry of Sound, The Factory After Party, Vauxhall) spinning funky vibes on the decks.

Call now for one of the limited spots on the OPEN MIC on 020 8694 6093 or email phil@themidimusiccompany.co.uk

FREE ENTRY to this stellar lineup:

Monzanto Sound
Monzanto Sound is a band from London, fusing together different styles from the African Diaspora and combining them with a hypnotic, psychedelic edge.

They are a high energy, rhythmic group with an ear for space and simplicity, capable of getting any crowd moving.

Their sonic aesthetic is something that is considered carefully as they incorporate synths and effects in a way that has more inspiration from 90s dance and electronic music.

Mimi Koku, the lead singer, has a soulful, African sound and writes intentional, captivating lyrics, which have an emotional honesty that speaks on multiple levels.

People have described them as a blend between Can, Fela Kuti and Sade with dubby off kilter funk grooves.
https://linktr.ee/monzantosound

Shunaji
Shunaji is a music producer, rapper and vocalist hailing from Rome and currently based in London. She adopts experimental approaches to blend jazz-influenced soulful hip-hop with gloaming trip-hop and a touch of synthesizer-infused funk.

Shunaji’s releases have been acclaimed within independent music scenes in the UK and abroad, as she pushes the boundaries of mainstream music. She is the recipient of multiple awards including the PRS Woman Make Music fund, Help Musicians' Do It Differently and MOBO awards, and Sound and Music's Interpreting Isolation.

Shunaji has performed internationally and across the UK, including festivals such as Glastonbury Festival, Love Supreme, We Out Here and Wilderness.
https://shunaji.bandcamp.com/

Eka June
Classically trained French-born singer and music composer, Eka June has made her debut on the London Jazz Scene.

Plugged into the contemporary music circuit, Eka June’s music emerges from lofi, trap and soul, writing from life situations as a way to reflect on them and find outcomes.

Plumm
Plumm is a stage strutting, genre bending chameleonic dining with both light and shadow.

From jazz to rock to ambient to garage, Plumm’s distinctive tone and sound carries her through a live looped soundworld.
https://open.spotify.com/artist/17goxueRDomjijRHKaaQpT