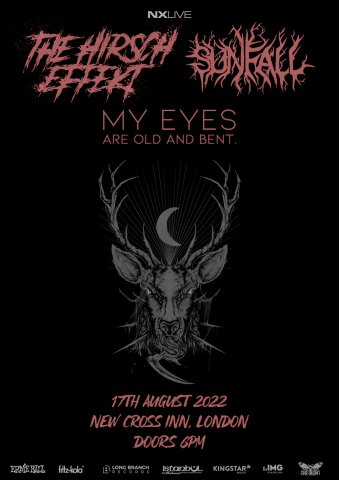 The Hirsch Effekt
The Hirsch Effekt have realized their philosophical dream of outdoing perimeters and pigeonholing. The band's musical spectrum, ranging from Hardcore, Chamber Music, Death Metal, Jazz, Electronica, Pop to any other imaginable genre, is being completely deconstructed, and woven into an highly individualistic mash-up of its own. The trio, hailing from Hanover, Germany, seem eerily to embody the musical resonance chamber of the black hole. The artcore group, consisting of multi-instrumentalists Nils Wittrock (i.a. vocals, guitars), Ilja John Lappin (i.a. bass, vocals) and Moritz Schmidt (drums), plays an extremely variable style of music, as well as combines various elements to the utter peak of sophistication. The end result is nothing less than a homogenous and enormous sound monster, nearly beating your speakers to death. Although the very first impressions coalesce into an epic, aggressive, and sinister sound, there is a specific personal touch and frankness in the German lyrics of Nils Wittrock. They signify authenticity and closeness and stand out as a counterpart to the musical periphery.
https://thehirscheffekt.de/​

Sunfall
Capturing what can only be known as “the descent” in the band’s name ‘Sunfall’, the quartet have created a deadly machine that presents itself as a storm of music. Traversing the multi-dimensional world of art and vibrations, Sunfall’s music takes many forms and embraces the full potential of futuristic genre blending and fluidity. The true wonder of Sunfall comes from the unpredictable animalistic nature of their music.
http://www.sunfalluk.com/